Celebrating Belle da Costa Greene: An Examination of Medievalists of Color within the Field 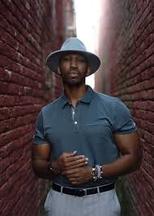 
​Epiphany "Big Piph" Morrow is a Stanford educated emcee and community builder from Pine Bluff, AR. He performs regularly with his 7-piece band, Tomorrow Maybe, and has worked with major acts including TI, Big Sean, Snoop, and others. He is lead coordinator of Global Kids-Arkansas, which sends stellar high school students in underserved communities abroad for social service projects. He holds Hip-Hop workshops, is a noted speaker (including TEDx), and is an artist whom The Source frequently highlights. Perhaps most notably, he has served as Hip-Hop Ambassador for the US Embassy traveling abroad to countries such as Morocco, Algeria, The Gambia, Seychelles, and Thailand. While abroad he not only performs, but holds workshops and creates with the native artists as well. One of his current projects is jUSt Books & Bagels, which provides free books, breakfast, and workshops for youth in underserved communities. He also recently released The Legacy Project, which is the first of its kind “interactive app based album”.

For more of Epiphany, visit the links below: